Activated Air (also described as Singlet Oxygen Enriched Air) is described in more detail on the manufacturer's website (www.eng3corp.com).  Briefly, humidified air is exposed to light of a specific frequency in the presence of a catalyst.  The light energy bumps an electron of molecular oxygen up one orbital level, creating a "singlet oxygen" atom.  Three millions of a second later, the electron descends back to its prior orbital position.  Normal molecular oxygen is restored, but the energy released by the descending electron is captured by water molecules within the humidified air (technically by energetically altering the oxygen-hydrogen bond angle of water).  What you inhale is room air laced with water molecules containing biological energy.  The water molecules are transported across the lungs into your circulation, from there into your cells.  The energy contained within the water molecules is then converted (and I don't know how) into biological ATP energy that your cells can use.  I think of Activated Air as a means of transferring electrical energy into biological ATP energy.  This process also initiates several cell signaling pathways, leading to additional beneficial biological effects. 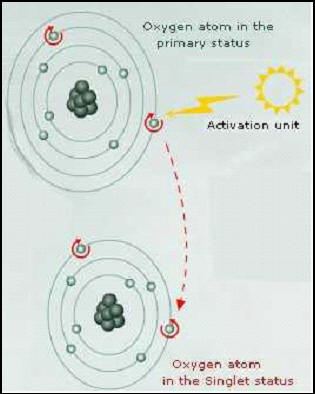 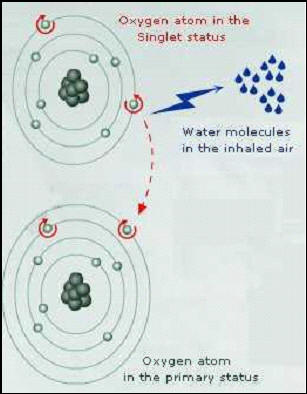 Antioxidant status increases by 20% - In an in vitro study, free radical generation by activated white cells was blunted.

Oxygen uptake increases by 7% - We aren't giving you extra oxygen, but during Activated Air your cells will extract more oxygen from room air.  This follows an increase in energy production and energy expenditure (biological work done) by your cells.  Remember, the best measure of aerobic fitness is your maximal oxygen uptake.  This parameter rises in response to other helpful cardiovascular (e.g.. the increase in oxygen uptake following EECP correlates with an improvement in symptoms of heart failure).

Energy production increases by 8% - As stated above; basically electrical energy is being converted into ATP biological energy.

Oxygen delivery to the cells in enhanced - The ability of circulating red blood cells to unload oxygen to the cells of the body is enhanced (technically speaking, red cell 2,3 DPG is increased, shifting the oxygen-hemoglobin dissociation curve in a favorable direction).

Oxygen utilization is increased - A greater percentage of oxygen is extracted from the air you breath, more oxygen is delivered to your cells, and more oxygen is utilized to carry out cellular work.  Oxygen levels in the venous blood returning to your heart will decrease, because your cells are doing more of what they are supposed to do.

Lactic acid production is decreased - When we exercise beyond our "aerobic threshold", when we can no longer generate ATP energy in the presence of oxygen, our cells begin to ferment sugar in a last ditch effort to generate energy.  A byproduct of sugar fermentation is lactic acid, the stuff that makes your muscle hurt when to push yourself too far.  I used the Activated Air device before the spring '07 Cincinnati Flying Pig Marathon.  My time dropped by 20 minutes, down to 4'22" for the 26 mile race, and I recovered more rapidly than in years past.

The sicker you are, the more toxic you are, the more your will benefit from Activated Air.  Some of you are just too sick, too energy depleted, to tolerate medical therapy or any form of detoxification.  I view Activated Air as a means of "giving you energy" such that you can better tolerate the treatments that you need.  We have observed a synergy between Activated Air and Magna Charge.  The former brings more energy and oxygen into your body, while the later increases the transport of oxygen and energy into your cells.  We also feel that there is a synergy between Activated Air and Ionator Foot Bath therapy.  If you want to take both, there is n reason not to take them at the same time.  Our overnight MME patients seem to benefit from concomitant Activated Air.  There appears to be no down side of this technique.  Please see www.eng3corp.com for more information.